Last Saturday I made an interesting QSO with MM/DH5JRB/P from the Isle of Ghiga.

Gigha (pronounced /ˈɡiːə/; Scottish Gaelic: Giogha) is a small island off the west coast of Kintyre in Scotland. The island forms part of Argyll and Bute and has a population of about 150 people, many of whom speak Scottish Gaelic.[6] The climate is mild with higher than average sunshine hours and the soils are fertile.
Gigha has a long history, having been inhabited continuously since prehistoric times. It may have had an important role during the Kingdom of Dalriada and is the ancestral home of Clan MacNeill. It fell under the control of the Norse and the Lords of the Isles before becoming incorporated into modern Scotland and saw a variety of conflicts during the medieval period.

The population of Gigha peaked at over 700 in the eighteenth century, but during the 20th century the island had numerous owners, which caused various problems in developing the island. 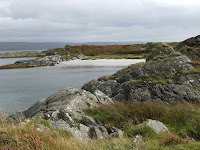 By the beginning of the 21st century resident numbers had fallen to only 98. However a "community buy-out" in 2002has transformed the island, which now has a growing population and a variety of new commercial activities to complement farming and tourism.
Attractions on the island include Achamore Gardens and the abundant wildlife, especially seabirds. There have been numerous shipwrecks on the surrounding rocks and skerries.
Submitted by EC1CW