PRC320 on the higher bands

Today I made some QSOs with my PRC320 on the higher bands. I started with a QSO with Porqtuguese station CT2JUT (Miguel) from Lisbon, who was using 100W into a 20m-long wire antenna. Miguel hasn't been a ham for a long time, but he has loved radio comunications since he was a very young boy. It all started as a MWL/SWL when he asked for a radio as a birthday gift at the age of six. He studied electronics and today he works as an electronics technician. He felt it yould be a good idea to make use of his knowledge with the ham radio hobby. He is an antenna/feedlines enthusiast and also tends to build his own equipment.
Then I made contact with English station M5AFD (Dave) from West England. His QTH is on the NW of the city or Birmingham, near the Welsh border. He was using 150W into a 4-element yagi beam. 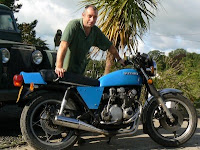 Finally I made a QSO with English station M3AFF (Alan) from Devon on the 15m band. Alan is a truck driver: VOLVO FH12 460 BHP and he is always on HF from the truck. He was born in 1967 on Fair Isle in Scotland. His dad was a part-time lighthouse keeper and farmer on the island. His interest in radio began when he used to listen to his dad's Eddystone EC10 receiver at the lighthouse. Other hobbies are motorcycles,photography, gardening and trying to mend anything that breaks!
Submitted by EC1CW