I still haven't managed to make any DX with my PRC-320. The propagation was good because I could hear an Australian station from Perth on 18Mhz. Next time I will try with a better counterpoise as so far I have only used a 10-meter wire. If necessary I will also try a longer whip or a long wire antenna.
From my car I made a couple of QSOs with SV9 (Crete) stations. In the picture is John Papadakis (SV9CJO) with his Yaesu FT-2000. 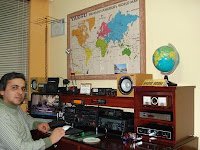 Crete is the largest of the Greek islands and the fifth largest island in the Mediterranean Sea. It forms a significant part of the economy and cultural heritage of Greece; while it retains its own local cultural traits (such as its own music and dialect), Cretans identify themselves as Greeks. Heraklion is the largest city and capital of Crete.
Crete was the centre of the Minoan civilization (circa 2600–1454 BC), the oldest Greek civilization. The island is the location of significant ancient history, which provides popular modern day tourist destinations. They include the Minoan sites of Knossos and Phaistos, the classical site of Gortys, the Venetian old city and port of Chania, the Venetian castle at Rethymno and the Samaria Gorge. The Nikos Kazantzakis International Airport is located just outside Heraklion.
For centuries, Crete was known by its Italian name Candia, from the medieval name of Heraklion, Chandax (Greek: Χάνδαξ or Χάνδακας, "moat", Turkish: Kandiye). In Classical Latin it was called Creta and in Turkish Girit.
Submitted by EC1CW