This Sunday was a Yankee day for me as far as ham radio is concerned, and not because I have made many QSOs with the United States. The main reason is that the three QSOs of the day were with stations whose callsigns started with Y, namely YO8THG, YL3FT, and YC1FWO.
I was driving to a house my father has in the countryside just in order to collect a solar power generator that I intend to use with my Clansman PRC-320. A fellow ham (Ernesto, EA1LQ) convinced me to switch on my station in the house and try my favourite band (15m) on both SSB and CW. He looked at the cluster and told me that some Indonesian stations had been spotted on that band.
YO8THG (Geo) from Bacau was the first contact. As he was only working with 100W in SSB, this QSO gave me an idea that the propagation was not bad at all. Then I decided to move to CW and made a QSO with the fellow Yuris (YL3FT). 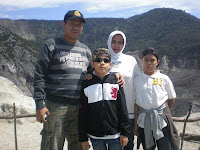 But the achievement of the day was a QSO with the station YC1FWO from Indonesia (operator Syarif ). I had to wait for quite a bit on the pile-up but it finally paid out. 13,000km is a good record.
Syarif graduated from Padjadjaran University Bandung in 1990. In 1997 he got a Master's degree from the University of Illinois at Urbana Champaign (UIUC). Now he is working as a govt employee and sometimes teaching Economics in a university.
He became a member of Indonesian amateur Radio in 1983 (when he was in a high school) and since then he has been active on the air.
Submitted by EC1CW