This is a video os a QSO on the 15m band with Maltese station 9H5SN (operator Marco) from Mosta. 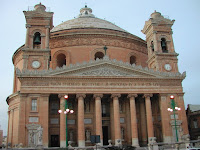 Mosta boasts the third largest unsupported dome in the World [1] dedicated to the Assumption. The Feast of the Assumption is held on August 15 and it is a public holiday. The church is also known as the Rotunda of St Marija Assunta. On 9 April 1942, the church was nearly destroyed during World War 2. An Axis bomb pierced the dome of the church but failed to explode. The detonator was removed and a replica bomb is now displayed as a memorial.
Submitted by EC1CW