This is the video of a QSO on the 20m band with Vito (IK8MDK) from Potenza, Italy.

Vito speaks perfect Spanish and the QSO was a pleasure. 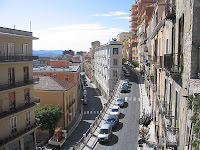 Potenza , city (1990 pop. 65,714), is the capital of Basilicata and of Potenza province in Southern Italy, in the Apennines. It is an agricultural, commercial, and light industrial center. Founded in the 2nd century BC by the Romans, Potenza was later incorporated (847) into the principality of Salerno. Of note in the city is the Church of San Francesco (begun 1274).
Submitted by EC1CW