Today I had a QSO on the 20-meter band with SV7LWV (George), who was operating from his uncle's station (SV7CFP) in Alexandroupolis. I still have some RFI in my car when I operate at full power (100W) on the 20m band. 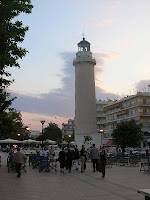 Alexandroupoli is about 14.5 km (9 miles) west of the delta of the river Evros, 40 km from the border with Turkey, 300 km (186 mi) from Thessaloniki on the newly constructed Egnatia highway, and 750 km (466 mi) from Athens. Around the city one finds small fishing villages like Makri and Dikela to the west, and suburban Antheia, Aristino, Nipsa, Loutra to the east, while north of the city are the ever closing Palagia, Abantas, Aissymi and Kirkas. At the 2001 census, the main city had a population of 48,885 and the municipality had a population of 52,720.
The city's history only goes back to the 19th century. Long used as a landing ground for fishermen from the coast of Samothrace opposite, the location was known as Dedeagatch, meaning "tree of the grandfather" (the word dede means "grandfather" and the word ağaç means "tree" in Turkish). The name was based on a local tradition of a wise dervish having spent much of his time in the shade of a local tree and being eventually buried beside it.
A small settlement developed in the area during the construction of a railway line connecting Istanbul to the major cities of Macedonia from Kuleliburgaz. The work was part of an effort to modernise the Ottoman Empire, and was assigned to engineers from Austria-Hungary. The settlement soon grew into a fishing village, which also used the name Dedeagatch.
Submitted by EC1CW