Tests with a new mic element

Today I have been doing some tests with a new mic element, with the help of Julio (EA1UP) and Ernesto (EA1LQ). I was in a car park with the righ on my car and the 2.4m manpack antenna. I threw a wire on the grouund as a counterpoise. 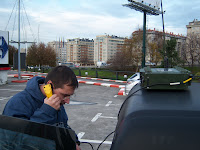 Julio reported a big improvement in the readability of my signal in 20m SSB with the new mic. It was sligtly larger than the original (I had to file the plastic case on the sides for it to fit) and had a greater impedance (600 ohm as compared to the original 300 ohm). I think Ernesto has found a smaller 300ohm piece so we will have to give it a try.
I also tested the setup (2.4m whip, wire counterpoise, high power setting) in a QSO with IW9HIK, who gave me a signal report of 59. The picture is courtesy of Anca (YO8SOY).
Submitted by EC1CW