PRC-320 on a spectrum analyzer

Today I went with Ernesto (EA1LQ) to do some testing in order to get the PRC-320 ready for the international Naval Contest. 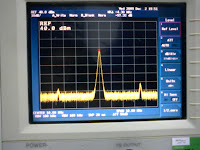 I got some pictures of the RF output on a spectrum analyzer.
The first picture is CW on 10.0000Mhz with a 10Mhz span. It shows two spurious signals 3.5 Mhz above and below the main signal. These two peaks bacame slightly smaller as the transmission progressed and did not seem particularly worrying, as they appear to be consistent with the service manual specs. They are 40dB below the main signal, so if we assume that the PRC-320 transmits the main signal at its nominal power of 30W, then the spurious signal would be in the range of 3mW. If we are thinking in terms of signal strength, 40 dB represent between 6 and 7 s-meter units. 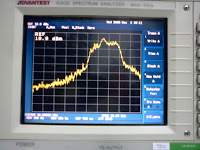 But we were mainly concerned about the modulation in USB so we analyzed the output in that mode, and the result is presented in the second picture. We used the FM noise from a TV set as an AF generator. We were mainly concerned about the peak that was there, very pronounced, even when we covered the mic. What do you think about it?
One of therese days I will take the PRC-320 to a mountain top near the city and ask some fellow hams to make recordings of the received signal.
Submitted by EC1CW