Is life too short for QRP? Slovenia with my "kornjaca"

I have just received an eQSL from Slovenia, for a QSO with S51ZZ (operator Vojko). He gave me a signal report of 59 from the West of Slovenia on the 20m band.
He was running 700 watts and I was using the PRC-320 with a military whip antenna. On his eQSL card you can see a picture of his dog Punca. I have had a number of QSOs with Vojko in the past, and I think he has also participated in the Southern Cross DX Net. 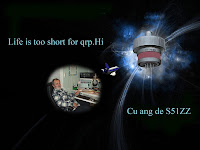 His signal is usually very strong over here, which probably has to do with the location (I think he is just a hop away) and the power he is using. If you look at his QRZ.com entry you can see a nice picture with his philosophy: "Life's too short for QRP."
Probably he is right, but the truth is that with my "korniaca" (it means "turtle" and is the way my radio was called in the former Yugoslavia) am enjoying again the quest for new DX countries... such as Slovenia... Hi Hi.
Submitted by EC1CW