I have been making some QSOs with the PRC320 on the 20m band, some of them with stations I had already worked before in worse conditions, such as I2OHO (Luciano from Milano) or EA8FC (José Antonio from Telde, Gran Canaria). Other stations I have worked are DJ1KJ (Hans) from Frankfurt and EC8AAD (Candi) also from Telde. 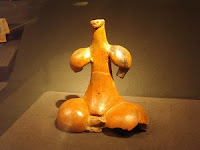 The presence of Franciscans from Majorca in the XIV century make Telde, created by papal decree in 1351, the first city in the Canary Islands from a European perspective. Telde was the eastern centre to the Guanches, and the renowned Guanche King Doramas, it's believed, lived here.
Telde's name actually tells us something about where the original settlers on the Canary Islands came from. Telde, situated in a most fertile area of Gran Canaria, has it's equivalent province in Morrocco in a very fertile region called Tedlah. Telde is the spot where the famous Idolo de Tara figure was discovered.
Submitted by EC1CW