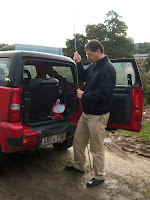 I have just received a new Clansman battery and decided to test it with some evening work on the 20m band. The first picture shows how easy it is to mount the 4m military whip antena (ex GDR army). It consists of 4 sections with in-built bayonet style quick disconnects. 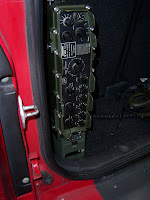 The second picture shows the PRC-320 station with the new 4Ah battery fitted. I charged it as it arrived today but it only took slightly more than 1Ah, so I hope it was not totally discharged.
The first QSO I made was with the US (NX7TT from Idaho). The next QSO was also with an American station, WA2VUY (operator: Angel), from a rural area in the state of New Jersey, some 8km west of the city of New York. He speaks perfect Spanish and gave me a signal report of 55. 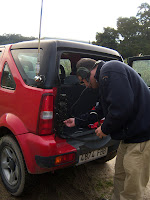 Finally, I also made a very interesting QSO with the Catalonian Station EA3DTD from Delta del Ebro in Tarragona (operator: Toni) who gave me a signar report of 57. We thwn moved to CW to try to make a QSO in that mode. I was using the pressel switch (PTT) of the headphones as a key and it was a bit hard. I managed to copy him ok but there was strong QSB and I ended up losing him.
This QSO encouraged me to set up a sked with my friend Josep (EA3YK), so I gave him a call. He was on his way home, so I had to wait for 20 minutes or so. As the 20m band no longer worked, we dedided to try 40m. 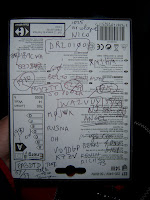 I managed to copy his signal perfectly with the PRC-320 and the 4m-long whip (he was running 100W into a full-sized antenna) but he was not able to copy me at all. I even copied him when he tried with his AEG 6861 military transceiver running only 20W so I hope we will manage to make the QSO when there will be better conditions.
The last picture shows my particular logbook today. I had to improvise it because I often forget my real logbook when I take it home to upload the QSOs to eQSL.
Submitted by EC1CW