Germany and Slovenia with the PRC-320

Today I made some contacts with the PRC320 on the 20m band. One was with the German station DL8MX (op. Wil) from near Nuremberg. He was using an IC756pro3 and a linear amplifier (400W) and a 4element yagi 13m above the ground. 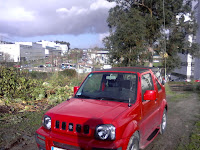 The other QSO was with the Slovenian station S59AKR, which belongs to the Akrapovic Exhaust Technology ham club.
Akrapovic d.d., is a manufacturer of top quality exhaust systems, carbon parts and casted titanium products. The concept of a scorpion, the leading motif of their logo, originates from the surname of the company’s founder Igor Akrapovic (in Turkish Akrap means Scorpion). What started in 1990 as an innovative, driven group of six, is now a modern prominent company of more than 13,000 m2 of production and commercial space and with over 420 employees.
The idea of founding the Akrapovic radio club was born a while ago. S59AKR is the calling code which helps operators Tom, Peter and Marjan by connecting fans of Akrapovic products all over globe.
I did not know the relationship with Akrapovic when I made the QSO but, curiously enough, I am also a fan of Akrapovic exhausts, which are used by many professional enduro teams.
Submitted by EC1CW