This is a video of a QSO with Bazilian station PY5QW (operator: Vigand) from Curitiba on the 15m band.

As he reminded me, I had already made a QSO with him on 25 February on the 20m band. Vigand also sent me a picture of the impressive location of his station in Curitiba. 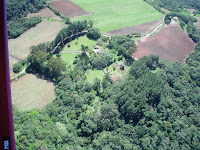 One theory about the name "Curitiba" comes from the Tupi words kurí tyba, "many pine seeds" due to the large number of seeds of Paraná pines in the region prior to its foundation. The other version, also from the Tupi language, comes from the combination of kurit (pine tree) and yba (large amount).
The history of Curitiba is marked by waves of European immigrants that started arriving after 1850, mainly Germans, Italians, Poles and Ukrainians. In 1853, the south and southwest of the province of São Paulo were separated, forming the new province of Paraná, and Curitiba became its capital.
Submitted by EC1CW