I have just received an eQSL for a QSO with Romanian station YO4WO (operator Oly) from Constanta on the 17m band. Apparently, the 4m vehicular whip I use barely tunes on that band because it is around one quarter wavelength and the internal antenna tuner is designed for high impedance antennas, but I still got very good results. 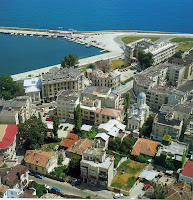 Constanţa (Romanian pronunciation: [konˈstant͡sa]) is one of the oldest cities in Romania, founded around 600 BC. The city is located in the Dobruja region of Romania, on the Black Sea coast.
A number of inscriptions found in the city and its vicinity show that Constanţa lies where Tomis once stood. Tomis (also called Tomi) was a Greek colony in the province of Scythia Minor on the Black Sea's shore, founded around 600 BC for commercial exchanges with the local Getic populations. Probably the name is derived from Greek Τομή meaning cut, section.
Submitted by EC1CW