I have just received this nice eQSL from 1B1AB (Soyer) from Northern Cyprus for an SSB QSO on the 20m band.
Northern Cyprus or North Cyprus (Turkish: Kuzey Kıbrıs), known officially as the Turkish Republic of Northern Cyprus (TRNC) (Turkish: Kuzey Kıbrıs Türk Cumhuriyeti, KKTC) [4], is a de facto independent republic [5][6][7] located in the north of Cyprus. Northern Cyprus declared its independence in 1983, nine years after a Greek Cypriot coup attempting to annex the island to Greece triggered an invasion by Turkey. It has received diplomatic recognition only from Turkey, on which it has become dependent for economic, political and military support. The rest of the international community, including the United Nations and European Union, recognises the de jure sovereignty of the Republic of Cyprus over the whole island. 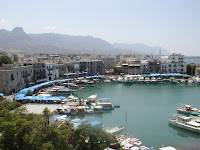 The history of Northern Cyprus begins with the gaining of independence of a united Cyprus from British rule in August 1960. Independence was only achieved after both Greek and Turkish Cypriots agreed to respectively abandon plans for enosis (union with Greece) and taksim (Turkish for 'partition'). The agreement involved Cyprus being governed under a constitution which apportioned Cabinet posts, parliamentary seats and civil service jobs on an agreed ratio between the two communities. However the Constitution of Cyprus, while establishing an independent and sovereign republic was, in the words of Stanley Alexander de Smith (an authority on constitutional law) "unique in its tortuous complexity and in the multiplicity of the safeguards that it provides for the principal minority."[5] Within three years, tensions between the two communities in administrative affairs began to show. In particular disputes over separate municipalities and taxation created a deadlock in government.
Submitted by EC1CW