Last Thrsday I made another 10k QSO, in this case with Argentinian station LU2DO (Andrés) from the city of Pilar. I also made a QSo with Brazil (PY2CX) and Ukraine (UY3LA).
Nick (UY3LA) from Lozovaya also made a contact with José Luis (EA1HNP) later that day and told him about our QSO. Then José Luis sent me a text message and we talked about it on 2m and 10m. 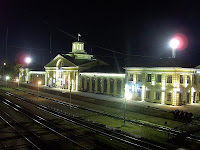 Lozova (Ukrainian: Лозова, Russian: Лозовая, translit. Lozovaya) is a city in the Kharkiv Oblast (province) of eastern Ukraine. Serving as the administrative center of the Lozivsky Raion (district), the city itself is also designated as a separate raion within the oblast, and is an important railroad junction in the oblast.
The current estimated population is around 64,300 (as of 2001).This makes Lozova the 2nd largest city in Kharkiv Oblast after Kharkov. The city was evacuated on August 27, 2008 due to a fire in a military warehouse. However there were no serious casualties and deaths.
Submitted by EC1CW