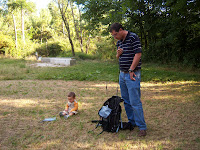 The other day I went to Breamo (SOTA reference EA1/CR-035) to test the Yaesu manpack radio. Breamo is near my summer QTH so it was a quick trip that did not require much preparation.
On the first picture I was using the radio on VHF, and I made QSOs with Ernesto (EA1LQ) and Julio (EA1UP). I also tried the radio pedestrian mobile around the Breamo monastery. 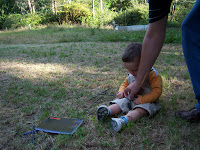 As you can see, my second operator was preparing the HF whip antenna, a 2.4m whip of the Clansman series.
Later I also tried a 4m whip to see if I could get better results with Ernersto, but the truth is that things did not improve much. This summit is not very high, and there are lots of trees all around.
Submitted by EC1CW