Yesterday I was on he countryside and I made several contacts with my Yaesu manpack. This one is with Greek station SV2MAP, from Ptolemaida, on the 17m band.

Ptolemaida (Greek: Πτολεμαΐδα, Ptolemaïda, Katharevousa: Πτολεμαΐς, Ptolemaïs) is a city in Northern Greece. It lies in the prefecture of Kozani, which is part of the periphery of West Macedonia. It is known for its coal (lignite) mines and its power stations.
According to archaeologists, the Ptolemaida region has been occupied since 6000 BCE. Prehistoric jewelry found in Ptolemaida. Archaeologists, in November 2005, discovered the remains of two farming villages dating back to the Neolithic period. A press report notes that such farming villages were trading centres and had a "developed knowledge of metalworking". 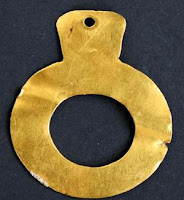 A golden necklace dating to roughly 4500 BCE was discovered on February 16, 2006. Associated Press reporter Costas Kantouris describes the item as a "flat, roughly ring-shaped [which] probably had religious significance and would have been worn on a necklace by a prominent member of society."
Lately in the lake Zazari near Ptolemaida there were found 16 houses that belong in the Neolithic era due to archaaeologists. These houses were in the lake and were exposed because of the decreased water level of the lake. That particular small settlement gives information about the society and the people in the Neolithic era.
Submitted by EC1CW