Dominican Republic: The country no. 71 (HI8LAM) 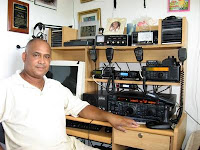 I have just received an eQSL from Dominican station HI8LAM (Operator: Luis) of a QSO on the 15m band when I was activating the Torre de Hercules lighthouse. This makes the country no. 71 validly confirme for my eDX100 award.
The Dominican Republic is a nation on the island of Hispaniola, part of the Greater Antilles archipelago in the Caribbean region. The western third of the island is occupied by the nation of Haiti, making Hispaniola one of two Caribbean islands that are shared by two countries. Both by area and population, the Dominican Republic is the second largest Caribbean nation (after Cuba), with 48,442 square kilometres (18,704 sq mi) and an estimated 10 million people.

Christopher Columbus arrived on Hispaniola on December 5, 1492, during the first of his four voyages to America. He claimed the island for Spain and named it La Española. In 1496 Bartholomew Columbus, Christopher's brother, built the city of Santo Domingo, Europe's first permanent settlement in the "New World". The Spaniards created a plantation economy on the island.[19] The colony was the springboard for the further Spanish conquest of America and for decades the headquarters of Spanish power in the hemisphere. Christopher was buried in Santo Domingo upon his death in 1506.
Submitted by EC1CW