Another QSO with the Czech Republic (OK2LDH)

This is the video of another QSO with the Czech Republic from Chao da Poza, SOTA reference EA1/LU-010.

Ludvik has already sent me a nice QSL card with a picture of the city of Olomouc. Olomouc (Czech pronunciation: [ˈolomou̯ts]) is a city in Moravia, in the east of the Czech Republic. The city is located on the Morava river and is the ecclesiastical metropolis of Moravia. 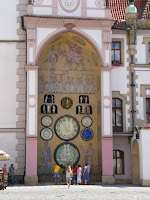 During teh Second World War most of the town's German residents sided with the Nazis and the German-run town council renamed the main square after Adolf Hitler. The Czech residents changed the name again after the town was liberated. When the retreating German army passed through Olomouc in the final weeks of the war they opened fire on the town's old astronomical clock, leaving only a few pieces (that can now be seen in the local museum). The one that can be seen today is a 1950s reconstruction and features a procession of proletarians rather than saints.
Submitted by EC1CW