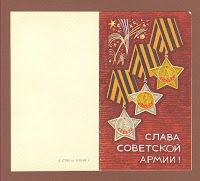 This is a video of a QSO with Latvian station YL2CF (Benito) on the 20m band. As you will see on the video, Benito speaks perfect Spanish.
Benito started his ham band activities in 1966, having returned home from the service in the Soviet Army, and got the SWL call-sign of UQ 2-037-6, later he got the transmitting license of UQ2GCF, and at present he uses the YL2CF callsign, as he says on his QRZ.com entry, perhaps the last one... I hope we meet many more times in the future.
He is often on the 20 meter band SSB,looking for shorter or longer ragchew QSOs with hams around the globe. On the picture you can see a Soviet Army postcard of 1966.
Submitted by EC1CW