In spite of bad propagation conditions, I managed to make some interesting QSOs with the PRC320 on the 20m band. One of them was with ID9/F4BKV, from the island of Lipari. 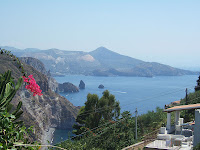 Lipari (Sicilian: Lìpari, Latin: Lipara, ancient Greek: Meligunis) is the largest of the Aeolian Islands in the Tyrrhenian Sea off the north coast of Sicily, and the name of the island's main town. It has a permanent population of 11,000; during the May-September tourist season, its population may reach up to 20,000.
Lipari's position has made the harbor of strategic importance. In Neolithic times Lipari was, with Sardinia, one of the few centers of the commerce of obsidian, a hard black volcanic glass prized by Neolithic peoples for the sharp cutting edge it could produce.
This is the video of the QSO: