I have just received an eQSL for a QSO with Norwegian station LA5YJ (operator Hugo) from Halden on the 20m band using my Clansman PRC-320. This makes the 22nd country validly confirmed by eQSL using this radio. There are only 3 left for my 25-country target.
One of Norway's two nuclear reactors is located in Halden. The "Halden Boiling Water Reactor" is a research reactor located 100 metres (328 ft) within Månefjell, adjacent to the Saugbrugs paper mill. It is in operation about 50% of the time and, in addition to research data, supplies steam to the mill. 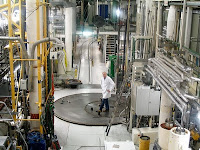 The reactor is operated by Institutt for energiteknikk (IFE), one of Halden's largest employers, and is the largest experimental facility operated for OECD Halden Reactor Project research.
Evidence of early human settlements in this region of Norway have been found, particularly in the Svinesund area of the municipality where rock carvings from the Nordic Bronze Age can be found. Named after a small farm Hallen (English: "rise" or "slope") first mentioned in 1629, "Halden", became the city Fredrikshald in 1665 for Frederick III of Denmark. The Gud med oss (God be with us) coat-of-arms created in 1665 shows a knight standing on a mountain, yellow on a blue background and was inspired the bravery of the citizens of the city in the Dano-Swedish War (1658–1660).[2]

As a reference to the town's citizens burning their own houses to prevent them being taken on 4 July 1716 by Karl XII of Sweden, Halden is one of only two cities in Norway's national anthem. In 1718, the Great Northern War ended when Karl XII was shot and killed at the Fredriksten fortress. The fortress had been erected in the 17th century as a replacement for the Bohus Fortress lost at the Treaty of Roskilde in 1658 when Bohuslän was ceded to Sweden.
Never captured by force by any invading army (although occupied by Nazi forces in WWII), the Swedes unsuccessfully attempted to invade Halden six times between 1658 and 1814.
Submitted by EC1CW