I jave just received an eQSL for a QSO I made this morning with French station F6FLB (operator Pierre) from Calais. This makes the country number 17 validly confirmed through eQSL for my eDX award (25 countries).
Calais is a town in northern France in the department of Pas-de-Calais, of which it is a sub-prefecture. Although Calais is by far the largest city in Pas-de-Calais, the department's capital is its third-largest city of Arras. The population of the metropolitan area at the 1999 census was 125,584. 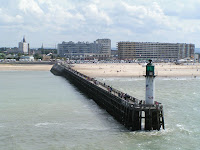 Calais overlooks the Strait of Dover, the narrowest point in the English Channel, which is only 34 km (21 miles) wide here, and is the closest French town to England, of which Calais was a territorial possession for several centuries. The white cliffs of Dover can easily be seen on a clear day.
The old part of the town, Calais proper (or Calais-Nord), is situated on an artificial island surrounded by canals and harbours. The modern part of the town, St-Pierre, lies to the south and southeast.
Submitted by EC1CW