Last Saturday Antonio (EB1AAL) and I went to visit Ernesto (EA1LQ) and I took the PRC-320 with me. There I had an opportunity to try it with his long dipole antenna, and Ernesto and I made QSOs with the Croatian club station 9A1CPB (operator Petar) from the Island of Brac. Ernesto is a fan of the IOTA programme so this was a good contact for him as well. 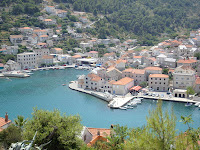 Brač is an island in the Adriatic Sea within Croatia, with an area of 396 km², making it the largest island in Dalmatia, and the third largest in the Adriatic. Its tallest peak, Vidova Gora, or Mount St. Vid, stands at 778 m, making it the highest island point in the Adriatic. The island has a population of 13,000, living in numerous little towns, ranging from the main town Supetar, with more than 3,500 inhabitants, to Novo Selo, where only a dozen people live. Brač has the largest airport of all islands surrounding Split.
In the 4th century BC Greek colonization spread over many Adriatic islands and along the shore, but none of them on Brač. Nevertheless, Greeks visited the island and also traded with the Illyric tribes; Greek artifacts were found in the bay of Vičja near Ložišća. Brač lay on the crossroads of several trade routes from Salona (today Solin) to Issa (today Vis) and the Po River.
In the year 9 AD, the Romans finally conquered Dalmatia after long fights against the native tribes. Salona became the capital of the new province and, probably because of its proximity to Salona, no bigger villages or towns were founded on the island. Signs of Roman habitation can be found all over the islands, but they usually remain single Roman villas, cisterns, and especially early quarries between Škrip and Splitska. Splitska also became the most important harbour to carry stone to Salona and the whole of Dalmatia. Diocletian's Palace, which later became the seed of close by Split, was largely built with limestone that was quarried on Brač.[1] Also agriculture, especially wine and olives, began in the same era.
Submitted by EC1CW