Northern Ireland and Bulgaria with the PRC-320

Today I have made a couple of QSOs on 15m with the PRC-320 and the 4m whip. It seem that it tunes acceptably well on that band just at the limit, so the 17m band would be the only left. The first QSO was with LZ1ND (Ted) and the second one with LZ1ANA. 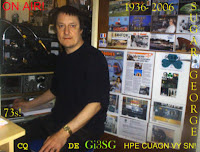 I also made a very interestning QSO on the 20m band with the Northern Irish station GI3SG (Martin) from Belfast. This calllsign belonged to his late grandfather John Martin, who worked for the MOD during World War II as a VI (Voluntary Interceptor) and his family asked Martin to apply for his callsign in his memory.
Martin's previous callsign was MI3UDX. He feels very privileged to be able to continue his Pops callsign and looks forward to working the bands. He has always been interested in vintage valve equipment and transceivers, and especially the HF bands on SSB, both as a SWL and more recently as an amateur station.
BACKGROUND HISTORY OF POP GI3SG (John Martin) 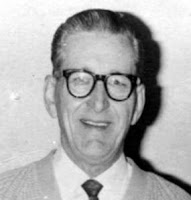 He began his first use of radio using a spark-gap generator in the Royal Signals during the 1st World War. He gained his Northern Ireland experimental radio licence in 1936. He was involved in receiving signals and forwarding them on to Bletchley Park for deciphering (The Enigma Code). Martin recently received information that he worked at a very secret DF location called Gilnahirk which until recently could not be divulged (the 60-year rule). He survived a parachute mine hitting the bottom of his street, and moved to another address, and continued transmitting.
His shack was entirely self constructed, and had a huge PA rack mainly consisting of 807 type Valves. He had a very novel way of rotating a yagi beam by a system of pinions and cogs turned by hand inside his shack by a car steering wheel! He was very adept at morse code and his party piece was to send with either hand! A red light bulb iluminated outside his shack whilst he was transmitting meaning no admittance unless Invited! Martin's mother had relayed this info to him. She was never invited! Martin WAS invited several times to listen as a small boy in the 1960s!
Submitted by EC1CW