Triple S with the PRC320

Yesterday I made three interesting QSOs with the PRC320, all of them with countries starting with S: Sweden, Scotland and Slovenia. The first QSO was with the Swedish station SM5CAK (operator Lars), 200Km South West of Stockholm. 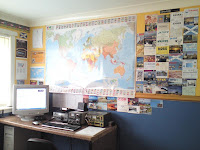 The second QSO was with MM3YCG (Callum) from Scotland. I am very happy for this QSO because Callum is registered on eQSL, so I expect to get a new country confirmed some day. He also enjoys operating portable while out walking - running about 5 Watts with the FT-817. As you can see from the picture on the right, he also has a nice shack.
The third QSO was with Igor (S59WT) in Slovenia, who was working from the Hinko Kosir Radioclub (S59EKL) in Velenje. I told him about my "kornjaca" transceiver and he said he knew it from his time in the army. 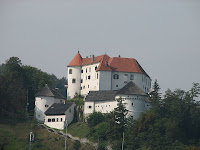 Velenje is a municipality with 33.331 inhabitants in the northeast of Slovenia. Stari Velenje (the old part at the foot of the castle) is mentioned for the first time 1264 and 1374 as small market town and was a center of handicraft and trade. Due to lignite mining, the city expanded especially after World War II. After the death of Yugoslav president for life Tito it was renamed Titovo Velenje in 1981, but the old name was returned to the city in 1991, shortly before Slovenia became independent.
Submitted by EC1CW