The joy of Indonesia (YB2JOY)

Today I made further tests with the PRC320, with the help of EA1AQ and EA1LQ.
Then I decided to test the FT857D with 4m whip and the FC-40 autotuner. I started with a couple of QSOs on the 20m band. The first one with IB1AB (Soyer) from North Cyprus and the second one with S51GL (Miro) from Slovenia. Then I moved to the 17m band and made a QSO with SM0OWX (Chris).
Then I decided to try my favourite band (15m) and heard an Indonesian satation (YB2JOY) in a QSO with a German station (DR...) that I couldn't copy. I waited until the end of the QSO and called the Indonesian station, who told me to move 5kHz up. I moved there and called again, and got a signal report of 58. The operator's name was Tomo, from the city of Kudus, in Central Java. 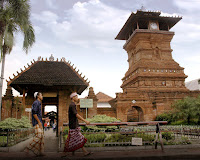 The city of Kudus was something of an important Islamic holy city in the sixteenth century. It is the only place in Java that has permanently acquired an Arabic name ('al-Quds', Jerusalem). Sunan Kudus, one of the nine Wali Sanga, was said to have been the fifth imam (head) of the mosque of Demak and a major leader of the 1527 campaign against 'Majapahit', before moving to Kudus.
The Mosque of Kudus (Masjid Menara) which dates from this period, remains a local landmark to this day. It is notable for both its perseverance of pre-Islamic architectural forms such as Old Javanese split doorways and Hindu-Buddhist influenced Majapahit-style brickwork, and for its name al-Manar or al-Aqsa. The date AH 956 (AD 1549) is inscribed over the mihrab (nice indicating the direction of Mecca).
The distance of 13,000km is my record of 2010, with 100W, a 4m whip and the propagation prediction indicating "POOR" conditions on the 15m band. Not bad.
Submitted by EC1CW