It was previously believed that zebras were white animals with black stripes, since some zebras have white underbellies. Embryological evidence, however, shows that the animal's background color is dark and the white stripes and bellies are additions.[1] 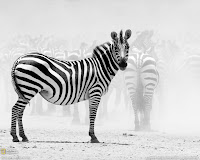 The stripes are typically vertical on the head, neck, forequarters, and main body, with horizontal stripes at the rear and on the legs of the animal. The "zebra crossing" is named after the zebra's black and white stripes.
It has been suggested that the stripes serve as visual cues and identification.[1] With each striping pattern unique to each individual, zebras can recognize one another by their stripes.
Others believe that the stripes act as a camouflage mechanism. This is accomplished in several ways. First, the vertical striping helps the zebra hide in grass. While seeming absurd at first glance, considering that grass is neither white nor black, it is supposed to be effective against the zebra's main predator, the lion, which is color blind. 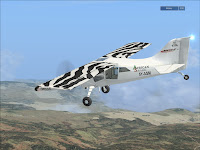 Theoretically, a zebra standing still in tall grass may not be noticed at all by a lion. Additionally, since zebras are herd animals, the stripes may help to confuse predators - a number of zebras standing or moving close together may appear as one large animal, making it more difficult for the lion to pick out any single zebra to attack.[4] A herd of zebras scattering to avoid a predator will also represent to that predator a confused mass of vertical stripes travelling in multiple directions, making it difficult for the predator to track an individual visually as it separates from its herdmates, although biologists have never observed lions appearing confused by zebra stripes.
A more recent theory, supported by experiment, posits that the disruptive colouration is also an effective means of confusing the visual system of the blood-sucking tsetse fly.[5] Alternative theories include that the stripes coincide with fat patterning beneath the skin, serving as a thermoregulatory mechanism for the zebra, and that wounds sustained disrupt the striping pattern to clearly indicate the fitness of the animal to potential mates.
Submitted by EC1CW

Email ThisBlogThis!Share to TwitterShare to FacebookShare to Pinterest
Labels: technique